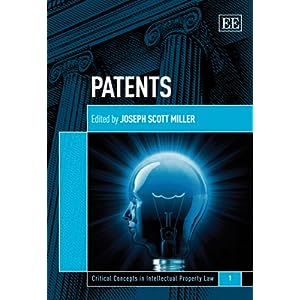 In his book, editor Joseph Scott Miller brings together a series of articles on perennial themes of patent law.  Patents have existed since the fifteenth century, but it seems as of yet, no one has got it right.  Many of the same controversies still plague patent law; whether it be standards of patent eligibility, creativity thresholds, or the underlying theorisation of the patent system. There are recurrent issues that, bearing the weight of technological change, call out for redefinition. This compendium on American patent law brings together a set of relevant articles that give us the foundation and perspective we need to answer these timeless questions. The book probes into these issues in four sections; patent law history, non-obviousness, economic analysis of patent law, patentability of software and business methods and, lastly, empirical analysis of patent law.

The first section brings together four articles on the historical development of US patent law. In the first article, P J Federico’s “The Operation of the Patent Act 1790” discusses inchoate patent law in the 1790 Act; the patent authority as well as the original interpretations of the law by Jefferson himself. Steven Lubar picks up thereafter in “The Transformation of Antebellum Patent law” and reviews the multiple reforms of patent law through the 18th and 19th century.  Moving on with time, “Patent Abolitionism”, by Mark Janis explores connections between the late eighteenth century patent abolitionist movement (in the UK) and modern day patent critique; so it seems that not much has changed.  The section closes in with Edward C. Waltersheid in “The Hotchkiss Un-obviousness Standard” revisiting the emergence and subsequent development of the non-obviousness standard; from novelty to the founding Supreme Court ruling, Hotchkiss v Greenwood ((1850) 52 US 248), which is portrayed as a case of sheer judicial activism. For the reader such a flash back through time, gives insight, perspective and depth to the modern day patent system: a rather digestible cocktail for patent law readers.  The established fact that a return to the past enlightens us for the present retains pungency.

The second part, composed of two articles on the non-obviousness standard, continues in a historical tone.  The first, “Graham v. John Deere co.: New Standards for Patents”, by Edmund Kitch also retraces the development of the non-obviousness standard, like the previous article from the historical section, though with more variation in terms of case law. The author also makes connections with other elements; commercial success, prior art, and even questioning the role of the patent office in judging non-obviousness. The second article of this section, “A Timing Approach to Patentability”, authored by John Duffy, very convincingly, puts timing considerations forward as the most suitable measure for determining non-obviousness standards.  This interesting article is an enjoyable read due to its practical approach.

The editor delivers in his third section classic articles of quintessential teachings on the economics of patent law.  Though placed third in the section, for intelligibility purposes we will first review Kitch’s seminal article “The Nature and Function of the Patent System”, where he expounds on the prospect theory. A prospect is taken to mean an opportunity to develop a technological possibility.   Kitch calls on the now infamous parallel to mineral claims and property rights to illustrate his theory. Any firm, it purports, can undertake a particular line of research at any time, this can lead to the phenomena of patent racing and common pooling where firms duplicate investments and or over-invest in the same activity in order to be first to patent.  To avoid such waste, the most efficient allocation of resources would dictate that one leading entity develops one technological prospect.  It is argued that the patent system creates such conditions by allocating broad and exclusive rights to a prospect at a stage of pre-commercialisation.  The leading entity can thus effectively organise the development of the particular technological prospect. Kitch’s article is a must read for any patent connoisseur. The impact of this theory cannot be underestimated in as much as its reliance on property rights, and advocacy for broad, early patents, has kept its ideas (however contestable) in the academic spotlight. The influence of this article is far-reaching, other articles – in this section and in general patent literature – refer back to the ideas articulated by the article and/or use the prospect theory as a point of comparison.

The economics section actually opens with Merges and Nelson’s “On the Complex Economics of Patent Scope”.  It stands in provocative opposition to Kitch’s “prospect theory”.  Looking at three categories of industries, cumulative technologies, chemical industries and science-based industries, Merges and Nelson conclude (contrary to Kitch) that broad or pioneering patents have generally lead to inefficient markets and a decline of innovation.  In some cases, natural cross-licensing or state imposed licensing has mitigated these effects as has the doctrine of reverse-equivalents in the courtroom. The authors construe that competition and precisely tailored patent scope is more favourable than Kitch’s organised innovation and broad patents. This is a brilliant response to Kitch’s theory: clearly argued, well written and very convincing.

The second article; “Standing on the Shoulders of Giants: Cumulative Research and the Patent Law” by Suzanne Scotchmer, looks at innovation in cumulative industries and how patent scope can be modified to most appropriately share the social surplus (profit) between firms.  What unexpectedly emerges is that prior agreements and collusive licensing between firms is the best method for fair distribution of costs and profits. This article places itself in the middle of the debate, taking a balanced view while weighing the interests of all parties.

In the fourth article, Duffy takes Kitch’s theory head-on in “Rethinking the Prospect Theory”.  He highlights the flaws in Kitch’s mineral, property rights comparison and calls instead on Demset’s auction system for national monopoly franchises as alternative parallel to the patent system. For Duffy, the patent is to be viewed as a monopoly in need of constraints. His concept closes in on loopholes left open by Kitch’s theory:  in particular, it purports to explain why early-granted, broad patent rights remain favourable even though the patent race and common pool problems are not totally avoidable, for reasons of the early expiration of patent rights.  The view of the patent as a monopoly is prevalent in patent literature and this article is a valuable asset in this respect as it provides a deeper understanding of the concept.

In the last article of this section, “Transaction Costs Theory of Patent Law”, Paul Heald takes a rather different view of the patent system; removing it from the reward system straight jacket. The patent is not seen as an incentive to innovate, rather as a means of cost reduction.  By materialising immaterial information, patents drastically cut down on transaction costs, facilitating and securing industry transactions.  The article lays out rather drastic conclusions, it has the merit of providing original material and much needed food for thought (about viewing the patent in a different light).

The fourth part of the book brings together three articles under the heading “Patentability of Software or Business Methods”, all pertaining to patent eligibility standards.  The question of software and business methods is an old but on-going debate. Chisum’s “The Patentability of Algorithms” argues in favour the patentability of Algorithms. He posits that the root of current legal problems with regard to algorithms stems from the wrongly decided Supreme Court decision Gottschalk v Benson ((1972) 409 US 63), where the Court improperly defines an algorithm thusly misconstruing the nature of the subject matter itself. The ensuing cases build upon this flawed basis, and, expectedly, provide no clarity. For Chisum, the Benson case should be expressly overturned while as long as it remains authoritative, ambiguity will continue to prevail in computer software patents.  This is a very comprehensive article, and, in this respect, no matter one’s position on the patent eligibility political spectrum, the article is another must read from Miller’s compendium.

Allen Newell responds to Chisum in his article aptly titled “Response: The Models Are Broken, The Models Are Broken”. Newell writes as a computer scientist, not a lawyer, laying out an original and informative point of view.  Expounding the underlying science of computer programming, Newell, in particular, emphasises the difficulty in making a clear cut between different elements of software programming, namely the algorithm itself, its embodiment, the results it produces and the encompassing computer program. His analysis is lucid and we come to better understand some of the inherent difficulties of his subject matter.  Newell highlights both the dangers of allowing algorithm, computer program patents, but also those of their exclusion. In this respect, Newell maintains, the traditional patent-incentive model is inappropriate and broken.

A Burkean perspective on patent eligibility by Cotter advocates bringing back a “light” version of three patent eligibility doctrines: technological arts, mental steps and physical transformations. They have important teachings for patent law that should not be thoughtlessly cast away. Modern patent law has lost its balance as it has allowed for practically limitless patenting which poses a threat to freedom of speech, personal autonomy and other liberty interests. This is quite an original article bringing issues of personal liberties into the already charged discussion.

The last section V, “Empirical Analysis of Patent Law” is contains two articles the first of which, “The Patent Paradox Revisited: An Empirical Study of Patenting in the US Semi Conductor Industry 1975-1995” by Hall and Ziedonis studies patent behaviour of 95 US semiconductor firms at the beginning of the 80s when the Court of Appeals of the Federal Court was instituted’ with the birth of the Court of Appeals of the Federal Circuit.  Following traditional patent theory, more firms should have increased their reliance on patents to appropriate the returns of R&D during his pro-patent era.  Research, however, suggests otherwise; that patenting served more strategic purposes.  For larger firms the constitution of a patent portfolio circumvented hold up patents and gave these firms leverage in negotiating access to external technology.  For smaller start-up firms, patents facilitated access into industry and allowed them to secure venture capital or other financing arrangements.  Readers beware, as some parts of this article are very densely populated with mathematical formulas.  The last article of the book, “Valuable Patents” by Allison, Lemely, Moore & Trunkey, seeks to understand how to identify and measure patent value, it does so by relying on litigated patents as a proxy for value. The article is based on a large scale study of patents granted between 1963 and 1999 and litigated patents terminated between 1999-2000.  Traditionally, three factors have been employed in patent valuation:  patent claims, the number of prior art citations and the number of citations received. Indeed, the study corroborates these factors as valid value indicators. Nonetheless, three new valuation criteria were identified:  families of applications and patents, prosecution length and patent age.  It was also found that certain characteristics of the patentee played a role in increased litigation; smaller firms and certain industries where more prone to litigation. Such studies constitute invaluable sources of information because (being a reflection of reality) they can validate or invalidate commonplace patent theory.

Putting the book down, one cannot help but feel intimately acquainted with American Patent law, for, at the very least one has, with every turn of the page, gradually built up a steady foundation for future understanding. Many issues remain topical: patent eligibility, non-obviousness and patent system theorisation.   Recently though, US patent law has seen its share of feature cases rocking the legal moorings of patent law: the Myriad litigations on DNA patents, the machine or transformation test questioned in the Bilski cases and diagnostics tested in the Prometheus cases. These issues were sadly missing from the book’s discussion.  Still, this is the type of collection of essays one must read in order to fully grasp and frame the more contemporary debates of patent law.