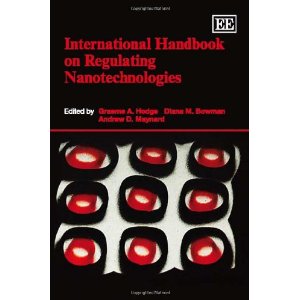 Those having even a passing familiarity with the broad and eclectic field that is “nanotechnologies” will know that its development relies on the work and collaboration of a diverse range of disciplines and interdisciplines, and that existing and notional products are targeted at the healthcare, environmental, construction, packaging, cosmetics, and other markets.  In short, nanotechnologies represent a bewildering array of technologies, each branded as “nano” (or small).  Nanotechnologies are seen as innovative solvers of a smorgasbord of problems, on the one hand, and uncertain experimental technologies posing a smorgasbord of risks on the other.  They are characterised as both simple and complex, as promising and horrifying, as unproblematic and boundary-pushing, all depending on the context and the speaker’s perspective.

Given the above, calls for the regulation of nanotechnologies quite reasonably abound.  However, the international policy community – including the International Organisation for Standards (ISO), the British Standards Institution (BSI), and the American Society for Testing and Materials (ATSM) – is struggling to define foundational concepts such “nanoscale”, “nanomaterials”, and “nanotechnologies”.[1]  As a result, these terms remain unclear and contested, and imprecision as to the very thing being regulated can be fatal to the efficacy and therefore the success of the regulation.  A dearth of good scientific evidence on which to base risk assessments (relating to short and long-term environmental and health effects of nanoparticles), which has been duly noted,[2] similarly complicates the regulatory endeavour, particularly given that the calls for regulation in this setting are largely risk-grounded.

It is against this backdrop that Hodge, Bowman and Maynard’s International Handbook on Regulating Nanotechnologies is offered.  A 26-chapter, 660-page tome crafted by a diverse collection of academic and policy experts, this is an important contribution to the political, legal, social, and ethical discourse around nanotechnologies.  The book opens with an analysis of the regulatory challenges posed by nanotechnologies (p 16-17) and explains in some detail the three “languages” that drive the discourses around these technologies, namely the technical language, the language of social phenomenon and the regulatory language, each of which often speak past each other.  The subsequent chapters cover a dizzying collage of issues, including:

In Part III, some of these issues are explored in the context of case studies which focus on carbon nanotubes, the chemical industry, cosmetics, drugs and medical devices, foods, and materials.  Many of these chapters highlight the fact that these technologies (and in some cases regulations) are being developed despite an absence of reliable data, not only on the effects of the science, but also on the efficacy of regulation.  Combined, they offer a deep and detailed view of the debates unfolding around the regulation of nanotechnologies, the regulatory options being considered or applied, and some considerations for the future.

The International Handbook on Regulating Nanotechnologies is informative, insightful, and, at 26 chapters, fairly comprehensive, and it is recommended for anyone interested in the realm of regulation and regulating emerging technologies.  Having said that, some shortcomings of the book are apparent.  First, as noted elsewhere,[3] an early exploration of the nano-based or nano-containing products already on the market would have helped to set the scene.  Second, a more readily apparent assessment of, and conclusion on, the ability of regulatory agencies to cope with this technology might have been helpful – we are asking a lot of regulators at a time when regulatory institutions are being hollowed out and deskilled.[4]  Third, one should be forewarned that, despite the use of largely accessible prose throughout, it is no easy read.  It is dense, it is information-heavy, and it is critical, all of which make it an excellent resource, but a challenging text.

[1] For a discussion of what has been happening in Europe from a regulatory perspective, see D Bowman et al, “Defining Nanomaterials for the Purpose of Regulation within the European Union” (2010) 2 European Journal of Risk Regulation 115-122.

[2] See H Nowotny et al, Re-Thinking Science: Knowledge and the Public in an Age of Uncertainty (Cambridge: Polity Press, 2001), Expert Panel on Nanotechnology, Small is Different: A Science Perspective on the Regulatory Challenges of the Nanoscale (Ottawa: Council of Canadian Academies, 2008), and S Harmon, S Yen and S Tang, “Invigorating ‘Nanoethics’: Recommendations for Improved Deliberations in Taiwan and Beyond” (2012) 5 NanoEthics 309-318.

[4] Note the work of G Lomax, “Rejuvenated Federalism: State-Based Stem Cell Research Policy” in B Capps and A Campbell (eds.), Contested Cells (London: Imperial College Press, 2010) 359-375 in this regard.