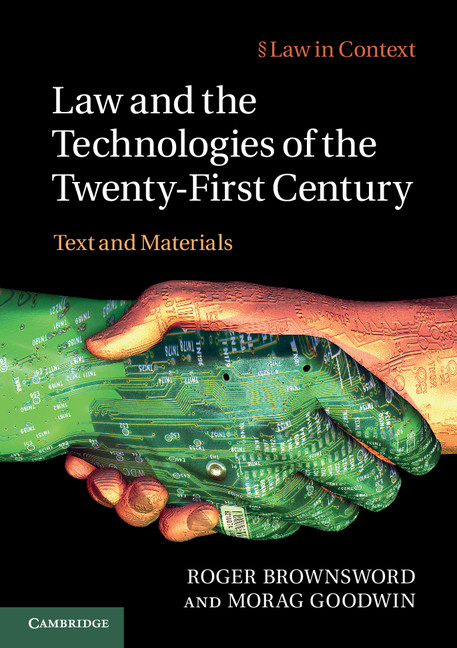 Brownsword and Goodwin’s Law and Technologies of the Twenty-First Century opens with an engaging introductory chapter which highlights the pertinence of law in the area of technologies. The authors do well in laying out both the vastness and the diversity of topics which must be addressed. Controversial aspects of technology which have attracted widespread discussion are outlined, serving as apt exemplars of the challenges that come with regulating such an array of issues in a fluid and rapidly developing landscape. In particular, the Harvard Onco-Mouse case discussion is used to illustrate the difficult considerations which must be taken into account, stressing the importance of considering ethical and cultural issues which move beyond mere reflection of underlying scientific issues. The chapter progresses to discussing issues around patentability of human embryonic stem cell work. Next, Europe and genetically modified crops are considered. The introductory chapter sets the scene well, and concludes with a discussion of the role of law in helping lawyers and regulators to engage in the issues surrounding the development and application of new technologies.

Next, the authors consider the development in biotechnologies and focus on disruptive technologies, noting that these “challenge the assumption that we, as humans, are autonomous and in control of our actions, these assumptions and differences are set to strike not only at our self-understanding (at both an individual and a community level) but also at the heart of legal practice” (P 19.)

Biotechnology is then contrasted with Information Communication Technology with discussion around Internet and the difficulties in regulating such a volatile environment. The remainder of Part 1 focuses on the regulatory environment, key challenges of regulation and technology as a regulatory tool. It begins with an attempt to clarify the key terms: regulation, law and governance, followed with discussion on the characteristics of a regulatory environment, recognising that this is far from a simple task. The authors begin by distinguishing Type 1 and Type 2 regulatory environments.  Next, they advance an interesting typology constructed of three generations of regulatory environment which result in a movement from normative to non-normative signals. They  reflect upon the effects which technology has in shifting traditional approaches to regulation and point out the potential unintended effects which regulatory interventions can engender, as well as contrasting attitudes to regulation (and regulators) in the past with today.  Chapter 3 discusses key criteria integral to evaluating the success for regulatory environments, highlighting the challenges that come with each, for example the difficulty when considering precautionary measures in assessing risk. Chapter 4 considers technology as a regulatory tool, using case studies of DNA profiling and a detailed account (with the ECHR judgement included) of the Marper case to illustrate points of concern with such technologies. The authors do well here, and throughout the book, in seeking a balance in raising the potential perils and promises of new technologies, highlighting that regulation and the form in which it is implemented have an important role to play. Whilst the benefits of including key provisions and case judgements within the text are apparent, these might have been better included in an annex as opposed to being set within chapters as it does tend to break up the flow for the reader.

Part 2 focuses on regulatory prudence and precaution respectively. The authors discuss in detail how regulators might deal with ‘prudential pluralism’, highlighting the complexities of performing risk and benefit assessments. GM crops, nanoparticles and sound science are employed as exemplars to illustrate the key challenges when considering controversial and novel technologies.

Part 3 is dedicated to exploring regulatory legitimacy, easing the reader in with an overview of basic ideas and key concepts. It follows on to look at the role which Human Rights discourse has had in the area. The authors have dedicated a chapter to honing in on the role of public participation in technology regulation, indicative of the authors clear understanding of the increasing roles which interdisciplinarity and in particular, public participation are playing in the discourse.

Part 4 discusses regulatory effectiveness from different perspectives, seeking to help the reader understand how the regulatory environment can be fit for purpose, as well as how it can fail. The authors invite the reader to consider that the success or failure of a regulatory environment can depend on a wide range of factors, including policy based considerations and draws upon examples ranging from the HFEA, criminal justice system and Biegel’s guidelines on cyberspace. Brownsword and Goodwin do well to highlight less obvious but nonetheless important considerations, including unanticipated consequences of regulation as well as external interferences.

Part 5 considers how we might as the authors put it, “get connected” to new technologies and subsequently, remain connected (p.371). This is one of the key challenges with emerging technologies – reconciling old laws with new technologies. The issues are explored in the rest of the chapter by virtue of a matrix of key considerations, each addressed in turn. The book concludes by revisiting Marper which was discussed in detail in Chapter 4 and on broad issues questioning the legitimacy of emerging technologies as regulatory instruments, honing in on the moral limits of reliance upon regulation, the impacts of technology on the moral community and as the authors put it, ‘on the prospects for law itself’ (p. 424).

The overarching narrative offered is one which raises the important questions around regulation, constantly encouraging the reader towards self-reflection, whilst offering a balanced account of the key considerations which should inform such deliberation.  Throughout the book, the authors make use of a wide variety of sources and examples to engage discussion and demonstrate their points, these include:  pertinent case law (with helpful consideration and elucidation of key judgements); dominant academic contributions in the field; contemporary literature and philosophical writings. The authors also frame their work by highlighting the key perspectives which lawyers are often predisposed to taking around the various topics discussed, and in explaining why and how a broader assessment is necessary. Additionally, subtle yet important nuances around regulatory intention and approach are teased out.

Research Fellow and Doctoral Candidate at the AHRC/SCRIPT Centre
Deputy Director of the Mason Institute, School of Law, University of Edinburgh.

Book Review: Law and Technologies of the Twenty-First Century
Tagged on: Book Review