By Sigrid Sterckx and Julian Cockbain 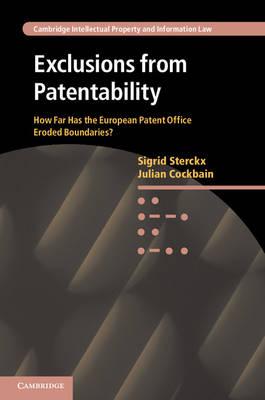 Sigrid Sterckx and Julian Cockbain’s Exclusions from Patentability is a provocative and intellectually stimulating read. It does not mince words when challenging the meandering logic of the various Boards of the European Patent Office (EPO), commenting freely, decisively and at times, derisively on whether decisions are considered by the authors to have been made correctly – or not. The remit of the subject matter encompasses exclusions from patent protection under the European Patent Convention (EPC). The book deals principally with patents’ history and actuality, also embracing salient jurisprudential issues, from time to time. Legislation and case law from the Court of Justice of the European Union is outside the scope of the study, and the European Biotechnology Directive 1998 is dealt with only where relevant to the European Patent Convention and related decisions. The book is focused, critical and highly detailed. It sets out a fascinating historical account and analysis of the evolution of the subject matter of the book, delving in depth into travaux préparatoires where appropriate. It is highly useful for researchers in patent law who require a more insightful view and, in terms of its utility, it has a potential dual function. First, it is a monograph for academics or research students, but, given its detailed case law analysis, it may also serve as a postgraduate cases and materials-type reference text for lecturers teaching on specialised patent courses who are in search of a core text. –

The book is divided into ten chapters, the first of which is introductory in which the importance of intellectual property rights are acknowledged. The necessity for exceptions thereto is equally stressed. Chapter one then examines a number of theoretical justifications for such rights – encompassing natural rights, distributive justice and utilitarianism, highlighting the various strands of thought as to whether we are dealing with rights or privileges. The dual nature of the patent balance between private interests and those of the public is emphasised, and the authors make it clear that patents should be regarded as privileges rather than rights, as this does not obfuscate the interests of the public. Sterckx and Cockbain express their concern regarding the trend of patent offices to erode the exclusions to patentability. The text is slightly unusual in that the authors are omnipresent, giving their views which at times are highly critical. Nonetheless, their observations are acute and their knowledge deep so it makes for an enjoyable, as well as an informative read.

Chapter two deals with the historical evolution of patent law and touches also on adjacent legislation such as International Convention for the Protection of New Varieties of Plants (UPOV) 1961. It points out that patents are not always deemed necessary by nation states. It also traces the legislative trajectory of the internationalisation of patent law, together with its exclusions. Negotiations regarding what should and should not attract patents are described and the fact that there was controversy over the granting of plant patents is noted and revisions to the EPC are set out.

Chapter three deals with computer programs, describing changes in policy towards patents in this area in a critical fashion. This chapter also illuminates the fact that policies and approaches of the Boards are not consistent, and that the language of the EPC is subject to misinterpretation at times.

Discoveries are dealt with in chapter four and a list of cases and commentaries on their rationales is set out, which makes it easy for the reader to appreciate the chronology in context. The authors pull no punches in stating that the EPC Rules 1999, which were introduced to achieve compliance with the Biotech Directive do not, in fact, comply with the EPC itself. This is a point which is returned to repeatedly in this book and the authors show how EPO case law in this area has been influenced by United States case law. Issues such as patenting isolated DNA is an area of conflict, and the authors believe that the EPO’s treatment of the exclusion in relation to discoveries emasculates the exclusion.

Chapter five covers methods of medical treatment and diagnosis, as well as relevant exceptions to patentability, along with a description of how these can be avoided. Relevant revisions made to the EPC in 2000 are discussed and evaluated.

The topic of chapter six is essentially biological processes for the production of plants and animals and again, it is viewed principally through a case law analysis. The authors point out that in cases of conflict between the Implementing Regulations and the EPC, the latter prevails under Art 164(2). This chapter includes an interesting exploration of the preparatory works for the Supplementary Protection Certificate (SPC) and the Convention relating to European Patent Law (CEPL), and also draws the reader’s attention to various conflicts in interpretation and translation when reading texts in different languages. Moreover, different approaches to the interpretation of words such as “variety” which are undefined and yet essential to decisions on patentability exclusions, show that some Boards have not endeavoured to get to the root of what was intended by the drafters of the EPC.

Chapter seven explores plant and animal varieties. The chapter includes a discussion of how the EPO has evaded patent exclusions in this area, showing, for instance, that whilst in one case hybrids are encompassed in a definition of variety, thereby rendering them unpatentable, in subsequent case law hybrids are deemed to be patentable. Relevant cases are scrutinised and it would appear that the various boards of the EPO have been quite generous in granting patents. Indeed, objections tend to be swept aside, although in the case of the onco-mouse, the scope of the patent was narrowed over time. Arguments about the hierarchy of legal norms are again raised but do not appear to gain any traction in the case law. Submissions by Greenpeace that important changes to the EPC should have been achieved through amending articles largely goes unheard. The authors argue that exclusions should be treated in the same way, but that three approaches have been identified, and that in some cases, this causes the public policy exclusions of Art 53 EPC to be side-lined. Major differences in approach are also discernible, as are differences between various Appeal Boards. It seems that neither appeals against patents (based on claims that genes constitute the common heritage of humankind) nor public concern over plant patents, make any impact.

Chapter eight examines the concepts of morality and ordre public, exploring their meanings through the cases. The authors have noted that in the Wisconsin Alumni Research Foundation, Decision G-2/06, which raised issues relating to human dignity, there was a notable shift from a utilitarian to a deontological approach, in that humans have come to be treated as ends in themselves, unlike animals. The chapter also examines case law in areas such as medical methods, and explores how Boards have dealt with the issue of obtaining consent from patients whose tissue may become the subject matter of a patent. Stem cell case law is also explored, and the authors do state that the EPO must, under the legislation, act as a moral arbiter, given their unique position. It has been suggested by Sterckx that both a utilitarian and deontological approach should be applied to difficult issues where the balancing test does not suffice.

Chapter nine draws the different categories of exclusions together in a succinct manner and the authors remain critical of some interpretative tests, asserting that some would appear to be incompatible with the Vienna Convention.

Chapter ten informs the reader that the quest of the book has been to describe the exclusions from patentability, while judging whether a coherent approach can be discerned. On the one hand, there have been concerted attempts by interested parties to erode exclusions. On the other hand, the authors believe that more of a balance has been struck by the Enlarged Board of Appeal in recent times.

The authors raise very interesting theoretical interpretations throughout the book, demonstrating their jurisprudential calibre, along with their keenly contextual grasp and elucidation of exclusions to patentability. This book will be of interest to scholars who seek to delve more deeply into historical analysis and theoretical critique.